September has been a bookish month for me. Not only did I get 10 new books (yes, I bought 3 more after I did the haul), I also read 4 books that month!

The fact that I just finished 4 books in a month also means that I’ve reached my Goodreads reading goal of 15 books this year! Hurray! And we’ve got 3 months left still, so I’m interested to see how many I managed to read before the end of the year. I’ll obviously keep you posted.

For now, though, let’s get into the books. 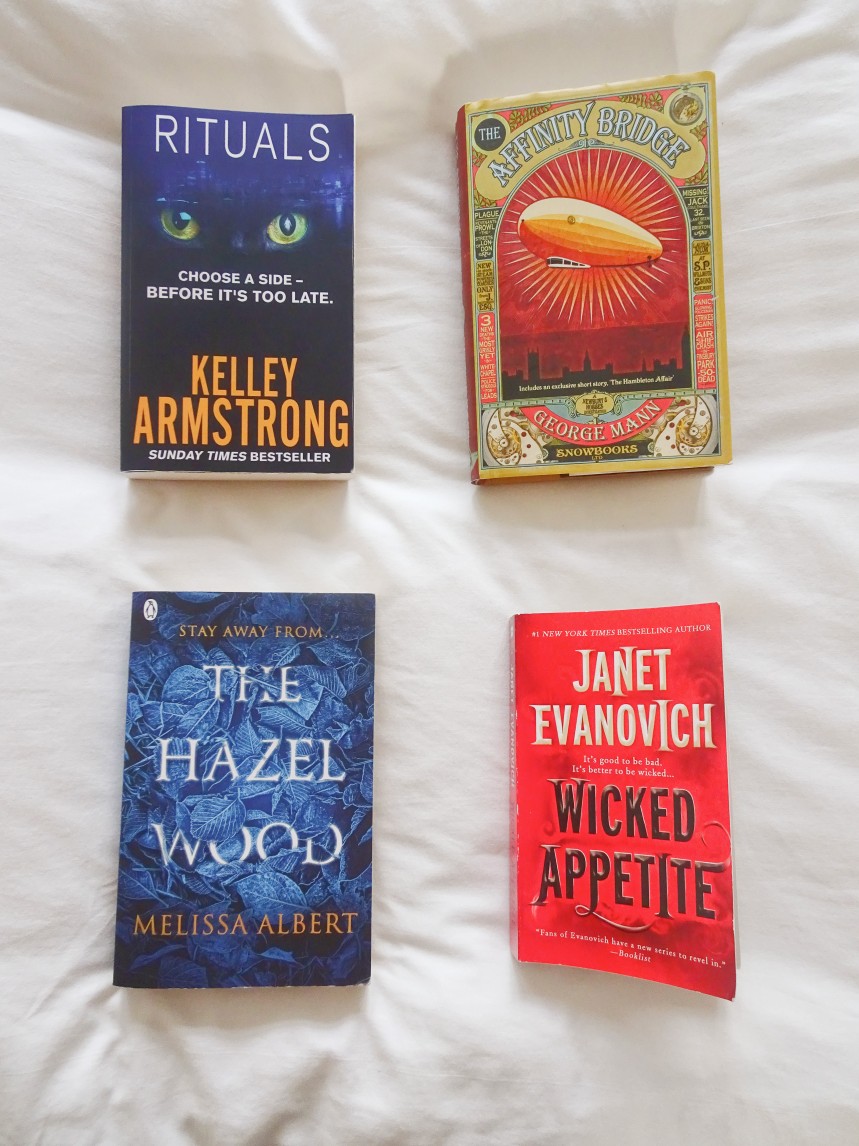 About the first book:

“Twenty-four-year-old Olivia Taylor Jones has the perfect life. The only daughter of a wealthy, prominent Chicago family, she has an Ivy League education, pursues volunteerism and philanthropy, and is engaged to a handsome young tech firm CEO with political ambitions.
But Olivia’s world is shattered when she learns that she’s adopted. Her real parents? Todd and Pamela Larsen, notorious serial killers serving a life sentence. When the news brings a maelstrom of unwanted publicity to her adopted family and fiance, Olivia decides to find out the truth about the Larsens.
Olivia ends up in the small town of Cainsville, Illinois, an old and cloistered community that takes a particular interest in both Olivia and her efforts to uncover her birth parents’ past.
Aided by her mother’s former lawyer, Gabriel Walsh, Olivia focuses on the Larsens’ last crime, the one her birth mother swears will prove their innocence. But as she and Gabriel start investigating the case, Olivia finds herself drawing on abilities that have remained hidden since her childhood, gifts that make her both a valuable addition to Cainsville and deeply vulnerable to unknown enemies. Because there are darker secrets behind her new home and powers lurking in the shadows that have their own plans for her.”

I can say with certainty that this is one of my favourite series I’ve read in a while. And I am so so sad I finished it! I loved the last book – gave it 5 stars on Goodreads – and a book like this is all I’ve been wanting since finishing this. I’ve wanted more like this before I finished it as well, to be honest. It was just so good, everything I had hoped for and more. It as a very good ending, and although I am so sad it’s over I feel like everything was wrapped up nicely and I don’t feel like I am missing anything. Except more books like this. Once I allow myself to buy more books I will definitely pick up more Kelley Armstrong books, and more Urban Fantasy sexy steamy funny sarcastic books in general. I’ve already got a Goodreads list.
Clearly, I would highly recommend this book to everyone (although maybe start with the first book in the Cainsville series called Omens, haha)!!

“Welcome to the bizarre and dangerous world of Victorian London, a city teetering on the edge of revolution.
Its people are ushering in a new era of technology, dazzled each day by new inventions. Airships soar in the skies over the city, whilst ground trains rumble through the streets, and clockwork automatons are programmed to carry out menial tasks in the offices of lawyers, policeman and journalists. But beneath this shiny veneer of progress lurks a sinister side. For this is also a world where ghostly policeman haunt the fog-laden alleyways of Whitechapel, where cadavers can rise from the dead and where Sir Maurice Newbury, Gentleman Investigator for the Crown, works tirelessly to protect the Empire from her foes.
When an airship crashes in mysterious circumstances, Sir Maurice and his recently appointed assistant Miss Veronica Hobbes are called to investigate. Meanwhile, Scotland Yard is baffled by a spate of grisly murders and a terrifying plague is ravaging the slums of the city.”

I read a book that was in my autumn TBR! I’m actually pretty proud of myself for actually reading this one, because usually if I plan ahead with books I want to read I never end up reading them..
Anyways, I actually quite enjoyed this book. I wasn’t sure at first how I felt about it, but I ended up liking it and giving it 3 stars on Goodreads. The writing style wasn’t entirely my thing, but it didn’t bother me enough to not enjoy it, and I ended up liking the characters and the story line. I also find myself thinking about the book every now and then, which is usually a good sign. I will definitely read the second book, as I already own that one, and then I’ll decide if I want more. Some of the reviews I’ve read said that the second book is a lot better than the third, so I have high hopes….

“Alice has spent most of her life on the road, always one step ahead of the strange bad luck biting at her heels. But when Alice’s grandmother, a reclusive author of a book of pitch-dark fairy tales, dies alone on her isolate estate  -the Hazel Wood – Alice discovers how bad her luck can really get.
Her own mother is stolen away – by a figure who claims to come from the supernatural world where fairy tales are set. Alice’s only clue is the message left behind:
STAY AWAY FROM THE HAZEL WOOD.
To rescue her mother, Alice must venture first to the Hazel Wood, then into the world where her grandmother’s tales began…”

Now, onto the two books that you’ve seen in my last post. I picked up The Hazel
Wood at the beginning of the month because I wanted to buy books but the books that I was in the mood for I couldn’t really find. I did not really enjoy this book. I don’t know if it was because I am kind of over YA at the moment, or if it was because it wasn’t actually the book that I was in the mood for, but I just didn’t like it all that much. The main character actually annoyed me a bit, I didn’t love what the story was doing, I wasn’t feeling the ending… I just wasn’t feeling the book. I really liked the idea of the story, and maybe if it would have been different or I would have been in a different mood I would have really enjoyed it, but right now I didn’t. There were some twists and turns in the book that I had not seen coming, and there were definitely some small bits that I enjoyed, but overall.. Nope. I ended up giving it 2 stars.
One positive thing, I like the cover a lot!

“Lizzy Tucker has inherited a historic house in Marblehead, Massachusetts, taken a new job as pastry chef for Dazzle’s Bakery in Salem, and set her sights on a comfortable future. The comfortable future and any hope for normalcy evaporates when dark-haired, dark-hearted Gerwulf Grimoire ad his nemesis, a blond beach bum named Diesel, enter Dazzle’s and change Lizzy’s life forever.
Grimoire has set his sights on the Stones of SALIGIA rumored to have found their way to Salem. The seven stones, each representing one of the seen deadly sins, can bestow frightening powers upon its owner. Powers that would be dangerous in Grimoire’s hands…
Diesel is a man with a mission: to stop Grimoire at all costs. In order to do that he’ll need to convince the baker she alone has the ability to keep Grimoire from the stones. Once Lizzy and Diesel become a team, Diesel will have to guards Lizzy’s body… day and night.
The seven deadly sins pretty much cover everything that’s wicked. Diesel thinks they also pretty much cover everything that’s fun. And Lizzy thinks Diesel and the Sins cover everything her mother warned her about…”

The last book I read was one that I picked up because it reminded me of the Cainsville series and that’s all I’ve been in the mood for. And although it is definitely not as good as the Cainsville series – at least in my opinion – I definitely enjoyed this one. Is it the best book ever written? Definitely not! But it gave me what I wanted: a lighthearted funny somewhat cute sexy romantic story, and I will definitely read more of the series as long as it keeps me entertained. In fact, I’ve already started reading the second book in the series, and as you might know I’ve got the third one lying around here somewhere.. 3 stars from me!

That’s all I read this month (which is quite a good amount!). Definitely overall some enjoyable reads, with one less successful book for me.
Now I’m excited to see how many books I manage to read before the end of the year.. Keep you posted!

Thanks for stopping by ❤

This site uses Akismet to reduce spam. Learn how your comment data is processed.